Given the desire to keep employees physically distanced, companies are investigating robots and cobots.  So much so, the market is expected to grow from $981M to $8B by 2026.  For those of you keeping score at home, that is 42% growth every year.  Which one should you consider? Let’s look at cobots vs. robots.

Industrial robots have been in consistent use since the seventies.  Typically, they are large heavy-duty equipment that can handle heavy loads and move quickly.  I’m sure everyone has seen a picture or video of a car moving down the assembly line, a robot welding something on the car with sparks flying everywhere.

I can remember Huffy bicycle- my first job while in college- using robots to pick up pieces of tubing from the cutoff saw and place them in another piece of equipment that would bend them into handlebars.  Then another robot arm putting the handlebars into a container where we would spend the next hour untangling them.  This was in the late eighties.

I don’t remember the robot being cordoned off- maybe we were smart enough to stay out of the way.  Because of the speed that industrial robots move, we keep them behind light curtains or in a separate room entirely.

When I graduated from college, I had an interview at the Ford plant in Cleveland, Ohio.  One of the plant tour stops was the new paint room Ford installed.  A car would come into the room, an operator would choose a color and robotic arms would paint the car.  Ford spent millions on the system which mimicked the paint motion of their best painters.

All robots are useless without end of arm attachments.  These are the grippers, tools, welding attachments, etc. at the end of the robot arm.  Most industrial robots are single, tooled, and not flexible.  They’re designed to complete one task.

They’re designed to be used next to humans.  Many have incredible sensors and vision systems that can sense human presence.  Programming is quick and easy.  They can be programmed by simply grabbing the arm and showing the cobot the motion you want it to take.

Because of their flexibility they can be deployed in low volume- high mix environments.

Cobots vs. robots?  Which is best for you?  It depends upon the application.  Here is a quick guide for you to consider. 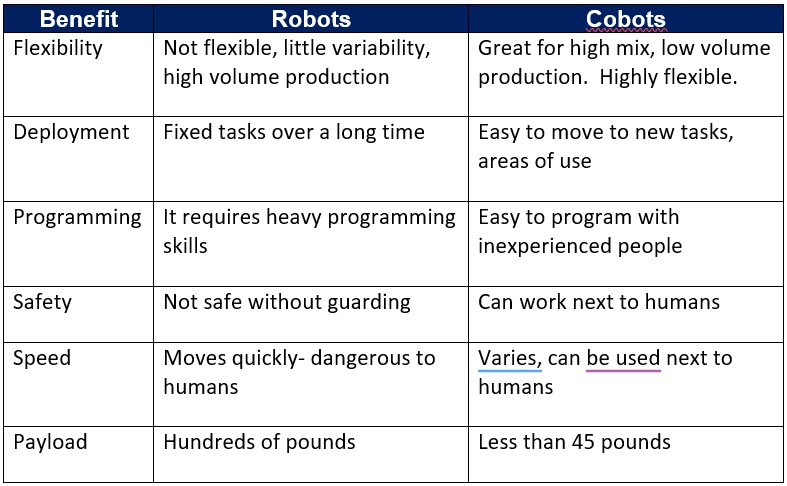